Optical probing of the Cerebellar Circuit 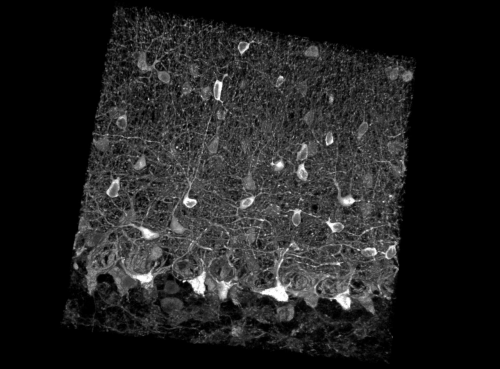 3D Projection of interneurons expressing GCaMP3 in the ML

Our work in the last decade has aimed at unraveling molecular and cellular aspects of synaptic transmission and intracellular calcium homeostasis in the mammalian cerebellar cortex using electrophysiology and optical techniques approaches. One aspect of this work is the study of the molecular profile and spatial localization of ion channels and transmitter-gated receptors in GABA-releasing neurons in cerebellar slices with focus on molecules governing responses to the excitatory neurotransmitter glutamate.

A second axis of the work is the analysis of calcium signaling in the various compartments of cerebellar neurons, with particular emphasis on activity-dependent calcium signals generated in the axon. Using digital fluorescence imaging and 2 photon laser scanning microscopy, we study the temporal and spatial properties of calcium signals in axonal varicosities of both, interneurons and Purkinje cells. We are interested in how voltage-gated calcium channels, calcium binding proteins and intracellular calcium stores shape calcium signals and subsequent neurotransmitter release. Interactions between metabotropic glutamate receptors (mGluRs) and calcium signaling have also been a recent theme of our studies.

In the past few years, our team has expanded activities from the in vitro slice preparation and we are now also working with an in vivo system. Using 2 photon laser scanning microscopy in anesthetized mice, we first characterized the properties of somatic calcium transients linked with action potentials in molecular layer interneurons loaded with organic calcium indicators. More recently, we are performing in vivo imaging in interneurons from mice expressing various varieties of the genetically-encoded calcium proteins GCaMP3 and GCaMP5.

This recent push to work in vivo gives us the possibility of studying various molecular elements of the cerebellar neurons in the intact animal. For instance, because of our previous work in vitro, showing that mGluRs have a powerful influence on the spiking pattern and intracellular calcium signaling of molecular layer interneurons, we are interested in dissecting the contribution of mGluRs to calcium signals in vivo. We are also interested in probing for the presence of functional presynaptic receptors in the intact animaI and in assessing their role in neuronal integration.

An important goal for the future years will be to link the optical monitoring of neuronal activity with specific sensorimotor tasks in the awake animal. Establishing new procedures to study cerebellar circuits in vivo by the incorporation of new techniques such as local photostimulation or development of novel genetic tools to apply viral mediated expression strategies with appropriate viral vectors is a central goal of our work.