Glutamate Synapses in the Cerebellum

Transmission at glutamate synapses in the cerebellar cortex: biophysical, pharmacological and photochemical approaches. 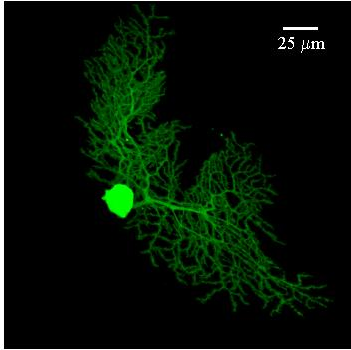 In the cerebellar cortex Purkinje cells receive about 200,000 excitatory parallel fibre (PF) synapses, and a single climbing fibre connexion. The parallel fibre synapses have ionotropic and metabotropic glutamate receptors associated with the postsynaptic density, the former mediating fast transmission, the latter, mainly mGluR1α, initiating intracellular signaling. We are investigating the properties, mechanisms and interactions of glutamate receptor signaling at PF synapses with electrophysiological, imaging and photochemical approaches. More generally, to study synapses and receptors in situ we are developing new probes and methods for photolytic release of amino acid neurotransmitters and other receptor ligands. mGluR1 receptors in Purkinje cells are present at PF synapses and are needed for normal cerebellar motor coordination. This forms a background to current projects to investigate the signaling pathways and interactions with fast synaptic transmission gated directly by L-glutamate. Previously we have characterised two signaling pathways initiated at mGluR1 receptors by glutamate released from parallel fibres. One acts to release Ca2+ from internal stores in spines, activating in turn Ca2+ dependent K+ channels and is dependent on prior activity in the Purkinje cell. The second is a slow excitatory postsynaptic potential (EPSP), producing sustained excitation by prolonged depolarisation over a few hundred ms and a slow Ca2+ influx. Both pathways are G-protein coupled to mGluR1α and regulated by protein tyrosine kinase/phosphatase. Recently we have found that activation of the synaptic AMPA receptors inhibits the slow mGluR EPSC, an action mediated by a src-family protein tyrosine kinase. As a result PF synapses mediating AMPA-receptor fast EPSCs will have reduced mGluR1 activation, whereas ’silent synapses’, with no AMPAR activation, will have up-regulated mGluR1 mediated Ca2+ signaling, responding to low glutamate concentrations released at neighboring synapses.Identification, interactions and role of postsynaptic glutamate receptors at PF synapses.Purkinje cells express several types of ionotropic glutamate receptors (AMPA, Kainate, NMDA), comprising different combinations of receptor subunits, and also auxilliary receptor associated proteins (TARPs γ2 and γ7), and mGluR receptors. Yet PF-PC synapses are generally viewed as a uniform population with homogeneous postsynaptic properties. Current experiments aim to distinguish the contributions of the several AMPA receptor subtypes differentially represented among PF synapses during PF activation. Experiments based on differences in pharmacological and biophysical characteristics, and kinetics of calcium concentration changes, aim to identify their roles, their distribution and interactions with mGluR1 signaling in PCs.Metabotropic glutamate receptors type 1 are important for Ca signalling and excitability, coupled to Ca release from stores in spines, to the Ca influx during the slow EPSP, to T-type Ca channesl and to an ERG K channel controlling excitability. We are studying the distribution of Ca signalling in the dendritic tree of Purkinje neurons initiated by mGluR1 activation, the interactions among the 4 downstream signaling pathways and the influence of ongoing electrical activity. 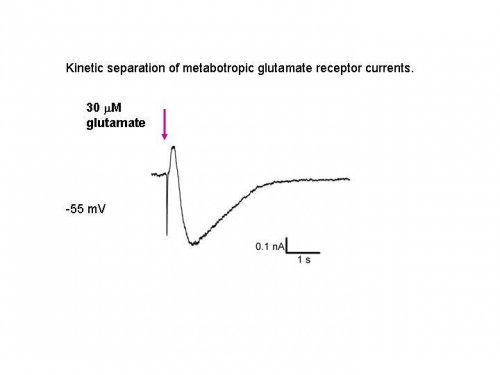 It is important to study the properties of synapses in situ since mechanisms are influenced by factors such as buffering or auxillary proteins that may differ in recombinant systems. The resolution of one- and two-photon laser microscopy is similar to the spatial scale of single synapses and can be combined with photochemical methods to study the release of transmitter or the activation of postsynaptic receptors. Laser photolysis has been applied here to study presynaptic mechanisms of transmitter release and postsynaptic mechanisms of receptor activation.In presynaptic terminals transmitter release is evoked in a controlled way by photorelease of Ca2+ ions from a ‘caged’ Ca2+-chelator perfused in the presynaptic neuron and terminal. This has been done in collaboration with Alain Marty and Federico Trigo to estimate the size of the readily released pool of quanta at small, single-site inhibitory synapses (Trigo et al., 2012). Postsynaptically it is important to study receptor properties in situ because of the influence of auxillary proteins and other factors present at the synapse. We have developed caged neurotransmitters – for example MNI-glutamate, DPNI-GABA and DPNI-glycine – suitable for studying the distribution of receptors and their activation and desensitisation kinetics over a wide concentration range at single synaptic contacts (Canepari et al., 2001; Trigo et al., 2009a, b, Trigo et al 2010; Papageorgiou et al., 2011). We have also developed caged sub-type selective glutamate receptor ligands to investigate pathways originating at different glutamate receptors (Palma-Cerda et al., 2012).

The spatial resolution of photolysis with one-photon excitation is strongly delocalised by light scattering deeper than about 20 µm in the tissue because of the photolysis by scattered photons. This is overcome in two-photon photolysis, where scattered photons cannot excite alone, permitting increased depth within the tissue without delocalisation. However, caged neurotransmitters currently available are not sensitive enough to two-photon excitation for experiments requiring high localized transmitter concentrations. New two-photon cages are being developed in collaborative projects with photochemical labs, aimed at applications in photostimulation/inhibition and the investigation of receptor kinetics at deep synapses in situ.

We continually develop optical methods for neuroscience, usually in collaboration with photonics labs based at Paris Descartes or outside (see e.g. Anselmi et al., 2011).