GABAergic Synapses in the Cerebellum 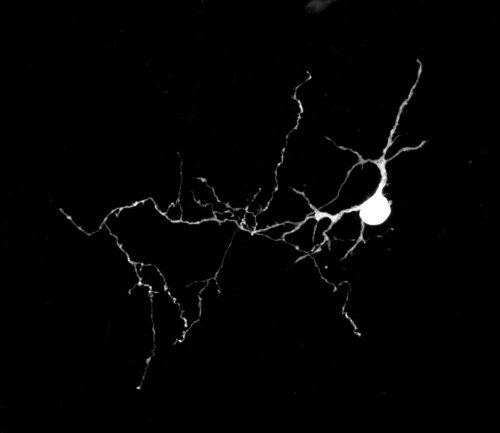 The cerebellar interneuron networkInterneurons (stellate and basket cells) of the molecular layer are interconnected by chemical (gabaergic) synapses, as well as by electrical synapses. This network is functionally isolated in slice preparations because excitatory inputs are inactive. In the past we have been studying this network in detail, notably focusing on interactions of chemical synapses with the excitability of interneurons (Chavas and Marty, 2003). Current work focuses on the role of electrical synapses as well as the effects exerted by interneurons on Purkinje cells (Oldfield et al., 2010).

Autoreceptors and presynaptic receptorsWe have shown that, following the release of GABA from interneuron terminals, GABA binds to axonal receptors located on the releasing cell and elicits GABAA (bicuculline-sensitive) currents (Pouzat and Marty, 1999). These autoreceptor currents enhance the excitability of the axon and give rise to burst discharges (Mejia-Gervacio and Marty, 2006). They are also responsible for a tonic increase of the release probability under resting conditions (Trigo et al., 2007). Presynaptic GABAA receptors are present not only on gabaergic axons of interneurons, but also on parallel fibers (Stell et al., 2007). On parallel fibers, they are not active under resting conditions, and their activation by spillover GABA facilitates glutamatergic release (Stell 2011).PreminisUsing paired recordings we have shown that somatic depolarization results in an increase of asynchronous presynaptic GABA release (Glitsch and Marty, 1999). This effect is presumably due to passive transmission of the somatic potential to the presynaptic terminal through the axon cable (Mejia-Gervacio et al., 2007). Passive electrical coupling through the axon cable is also responsible for a novel synaptic signal : presynaptic miniature currents, or preminis (Trigo et al., 2010). One vesicular release event actually gives rise to two simultaneous signals : a (postsynaptic) miniature current, and a presynaptic signal generated by axonal autoreceptors and transmitted to the soma by passive cable properties. Preminis are seen only during development of the molecular layer and are presumably involved in synapse formation and stabilisation. 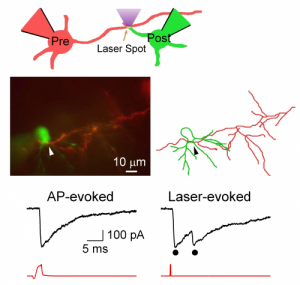 In collaboration with the teams led by David Ogden and by Isabel Llano/Thibault Collin, we have launched a new project aiming at the study of single synaptic sites at MLI-MLI synapses. Procedures are developed to elicit GABA release at one synaptic site only, and to collect the corresponding presynaptic and postsynaptic signals (see Figure). In this way an array of basic questions concerning synaptic physiology are examined, including the degree of receptor occupancy following one exocytotic event, the existence and number of vesicle docking sites, and the size of the readily releasable pool of vesicles.

Having established a paired recording between synaptically connected neurons, potential synaptic contacts are illuminated with a small laser spot. Laser illumination elicits calcium release from DM-nitrophen, which is included in the presynaptic recording pipette, and elicits quantal repsonses in the postsynaptic cell.